The Enigma of Stonehenge Book 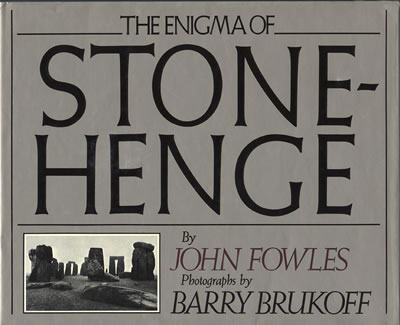 Reviewed by W. Calvin Dickinson
“The Photos Are Beautiful, Fascinating” The photographs are breathtaking. Sixty full-page photographs, some in color and some in black and white explore all the angles of Stonehenge and evoke the mysteries surrounding it. Each representation elicits floods of nostalgia for one who has visited this ancient monument and creates desire to visit in those who have not been there. Brukoff, a San Francisco photographer and designer, has shown the creative skill in his mind and in his camera in picturing the many moods, the many mysteries and the many fascinating details of Stonehenge……….The beauty and fascinating nature of the monument is wonderfully displayed by the photography of Barry Brukoff. This book could provoke an exciting conversation when prominently displayed on your coffee table.

“The Mystery of Stonehenge”
by E.F. Bleiler
Brukoff, the photographer, has, concentrated the emotional impact of the stones. With some of his photographs it is easy to see why ancient texts speak of the stones as dancing, for some of the uprights seem frozen in hieratic stopped-leap. In other pictures the stones loom in vague humanoid shapes, male and female, all with a sense of mystery…..Fowles and Brukoff’s Stonehenge may not be everyone’s, but Fowles writes vividly, the book is stimulating and the photographs are worth having for their own sake.

It has been said that more books have been written about Stonehenge than about any other single man-made monument. Novelist Fowles’ and photographer Brukoff’s is one of the most satisfying of all…but he has left it to Brukoff’s magisterial, almost anthropomorphic photographs (both color and black and white) to wrap the reader in Stonehenge’s mysterious presence. Beautifully produced, this work conjoins art, intelligence, and respect for things unknown.

The Enigma of Stonehenge is as much about perceptions of Stonehenge as it is about the physical monument itself. Because they are artists, novelist John Fowles and photographer Barry Brukoff see Stonehenge in a particular, original light, a thing to which each viewer responds uniquely, and which each age defines anew.