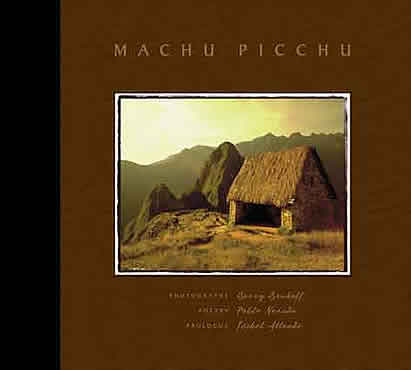 In 1984, I received permission from the government of Peru to be at Machu Picchu during all hours of the day or night to make the photographs seen here. I arranged my fortnight-long trip so I would be there during the full moon. I have attempted to show the reader a wide range of images of the ruins to convey my sense of amazement at the beauty, complexity, and workmanship manifested by the Incas.

I have chosen to present most of the images in this book as sepia toned black and white landscape photography. Since it’s rediscovery by Hiram Bingham in 1911 many highly creative photographers such as Martin Chambi and Edward Ranney have attempted to convey the grandeur and beauty of Machu Picchu via professional landscape photography in the form of coffee table books. I wanted this book to be something more as well. I hope to convey in pictures the feeling that I had as I spent many days covering every corner of Machu Picchu, through all times of day and night. I timed my trip to coincide with the day of the full moon. By providing, through the voice of Stephen Kessler, a wonderful new translation of Pablo Neruda’s epic poem The Heights of Machu Picchu , I hoped to bring the reader into a multi-sensory experience weaving the poetry, landscape photography and pictures of Machu Picchu details such as stonework, terraces and carvings which many people don’t see in a day visit.

As I write this, I have received word that Machu Picchu is sliding. Landslides closed the approach roads two years ago, and they are still a danger. The Peruvian government has just announced that it will double the fees for entry in the hope that this will deter so many tourists from visiting the ruins. Some of the increased income will be used to help stabilize the ruins. With all these changes, I can only think how grateful I am to have had the opportunity to spend time at Machu Picchu, exploring the vistas and details and in some way letting its spirit enter into me so that I could record these images. All of the images in the book are available as signed/numbered limited edition fine art photography for sale

MORE REVIEWS OF THIS BOOK

By Leslie Harlib
Ancient monuments and cultures such as Machu Picchu, Stonehenge, Morocco and Greece are irresistible to Barry Brukoff. Through his camera, the Sausalito Based designer and photographer has pursued new visions of the world’s oldest places for over 30 years….Brukoff, a passionate traveler, has published five books of photographic essays. His latest, Machu Picchu (Bulfinch/Little Brown, 2001) with a forward by Isabel Allende and Stephen Kessler’s new translation of Pablo Neruda’s poem Heights of Machu Picchu, was released in September.

Elaine Petrocelli, who owns Book Passage, has known Brukoff for several years; she met him when his book on Morocco, with text by Paul Bowles, was published in 1993. “His photography is outstanding,” says Petrocelli. “I’m not exactly sure it’s travel photography. He does photography of places. It’s different. Almost mystical in some ways. Maybe it’s the extreme care of his production. When you look at his book Machu Picchu, and see this absolute attention to detail in the production of the pictures, it’s amazing…..They really are works of art”……

Brukoff had to cull through thousands of images to choose the ones that ultimately, he says chose him…..”It’s about capturing light. The way light informs surface and shape Machu Picchu is the sum of private moments in my vision”…To achieve the haunting, sometimes brooding, starkly contrasting moods of his photographs, Brukoff scanned his black-and-white negatives and color slides into his computer. Using Photoshop, he converted the black-and-whites to duo-tones and made color corrections to the slides. Everything he did in Photoshop was done to get back to the moment that he took the picture, to try to get the emotion he felt at the time, explains Brukoff……” I was there at a unique time. I want somebody to pick up a book of mine and go on a really wonderful journey, to feel those moments. I was trying to express how it felt to be there, not only how it looked.”

By Elizabeth Stewart
Sacred Places inspire poetry and art. Such is the case with Machu Picchu (A Bulfinch Press Book/Little, Brown and Company, $40), a moving photographic record by Sausalito photographer Barry Brukoff. Published alongside a new translation by Stephen Kessler of Pablo Neruda’s epic poem Heights of Machu Picchu and with a prologue (that is itself a poem) by internationally acclaimed novelist Isabel Allende, this elegant volume offers mystery, exhilaration, poignancy and romance to its lucky recipient.

The book is a bilingual edition; both the prologue and the poem run together in English and Spanish. Brukoff’s images of the ancient Incan cite in Peru- mostly in black and white duotone, with a sampling of color and bronze-tone – were taken at all hours of the day and night, and during the full moon. They show his “amazement at the beauty, complexity and workmanship manifested by the Incas.” Or in Neruda’s words, the “Architecture of eagles.” This is a gift of soul.