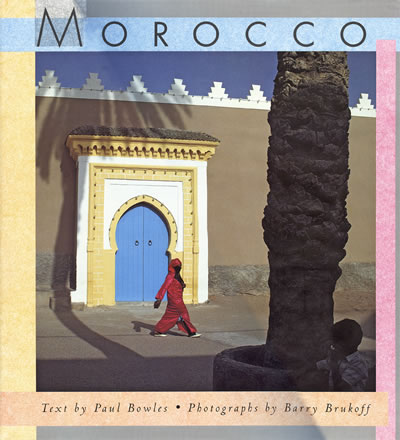 Morocco is a land of heat and light, of vibrant colors shimmering under a North African sun. Clinging to the northwestern most corner of the African continent, it has stood at a cultural crossroads for 1,000 years, its caravans penetrating deep into sub-Saharan Africa, its armies swarming north across the Straits of Gibraltar to conquer half of Spain before Morocco was itself colonized by the French. Morocco is a land of heartbreaking beauty, color, and contrast, and in Morocco, author Paul Bowles and photographer Barry Brukoff bring it all to life in glorious images and lively prose. The 80 accompanying photographs are stunning, revealing a country composed of primary colors and brilliant shifts of light. A word of caution: open Morocco in a weak moment, and you could find yourself on the phone to your travel agent before the book is even half-read.

Two years ago, a San Francisco-based photographer named Barry Brukoff went to Morocco to meet its most famous American expatriate, Paul Bowles, and enlist his aid in a book about the North African country. Bowles certainly had the credentials to complement Brukoff’s pictures with the words. The writer/composer had first traveled to Morocco with his wife in the 1930s. His novel The Sheltering Sky, was based on that initial experience in this fascinating country. The result of Brukoff’s shots and Bowles literary archaeology is Morocco (Abrams, hardcover, $49.50), one of the most evocative and compelling coffee-table books of the season. Brukoff’s 80 color photographs provide wonderful insights into the texture of Moroccan Live, and Bowles’ lucid intelligence helps us to understand how an American could become to fascinated by it.

In an era when destination books are a nickel a dozen and exotic locales have become the most over –photographed subject around, it is rare to find a book about a place that stands out in its beauty as this one does……….Yet these photos, by Barry Brukoff of San Francisco, do undeniably have something special in them, something more beautiful and mysterious that is quite hard to define. Perhaps it is his sense of light, which is extraordinarily fine in both day and evening….

Extraordinary Visions reviewed by Patricia Holt Enthralling might also be the word for “Morocco”, with text from previously published magazine articles by novelist Paul Bowles and dazzling photographs by Barry Brukoff (Abrams; 128 pages; $49.50). In pictures and descriptions of cafes, beaches, back streets, tombs and mosques, the book mesmerizes with its vision of Moroccan life, surreal yet mundane. “It is a peculiarly Moslem gift, “ Bowles writes “being able to create the illusion of luxury in the midst of poverty, and it never fails to arouse my admiration when I see it displayed. But then, these people are the supreme illusionists; they can give a straightforward action the air of being a conjurer’s trick or make the most tortuously devious behavior seem like naturalness itself”